Every Breath You Take: Lessons from the Oncology Unit and Beyond

Let's talk about the breath, specifically about the times when you want to take a deep breath, but you can’t. I’m going to share with you some stories of how I worked with the breath with my students and myself during challenging times.

As you read this, I'm going to encourage you to take a few slow, conscious breaths. Try not to see it as nagging. We all need reminders. Ready? Slowly inhale... Slowly exhale.

The charge nurse told me a little about him; he was a man in his late twenties who was being treated for stomach cancer and was experiencing a lot of pain, so she hoped my breathing lessons would help him. Even before I knocked on his door, I could hear him moaning. His room was dark and the TV was on. It took me a moment to acclimate my eyes, but I introduced myself before being able to see him clearly. I started to tell him what I was there for, but he interrupted me and asked if I could increase his pain medication. I told him no, but we could try doing some breathing exercises that I found helped with other patients. At this point I started to see things more clearly in the room and I noticed there was no visitor’s chair anywhere in the room, so I stood near his bed. He was panting and frequently shifted his position. He agreed to try the exercises, saying he would do anything that might help. He turned the TV off and I asked him to get as comfortable as he could. I did a quick intake, asking him if he could give his pain a number between one and ten, he said it was at a nine.

What I really wanted to ask him to do was take some deep breaths, but I knew that would not work with him in this much pain. So instead, I asked him to hum his exhale out, which he did. After a few rounds I asked him to lengthen his exhales while humming. I let him continue to breathe in through his clenched teeth, and after about eight rounds, his exhales started to grow a little longer and he switched to inhaling through pursed lips. Then I switched him to breath sipping on the inhales, and I directed these by lifting my hands at regular intervals. His breath was still pretty fast, but he was tracking my instructions really well, even when I asked him to switch to breath sipping on the exhale. After a few more rounds of breath sipping, I asked him to go back to uninterrupted breathing, but with hand motions of his own to mimic the flow of breath: hands moving apart for the inhale, closer together for the exhale. It was here that I saw his breath really change. He closed his eyes and his breath became smoother, his face a bit more relaxed. I stopped instructing and let him continue on his own. After a while, he rested his hands and opened his eyes. We talked a little more about breathing and my background and then I asked him to rate his pain again and he said it was down to a five.

I became interested in pranayama because of my own breathing issues; there have been several times in my life when I wasn’t able to breathe. The last time I had an attack, I was riding in the car with my husband. I noticed a familiar tickle in the back of my throat, so I stopped talking and started swallowing, hoping to calm my body down. When I started coughing, then choking, I motioned to him to pull the car over and I jumped out, trying to get fresh air. I could breathe a little through my nose, but the instinct to gulp air took over and I tried to breathe through my mouth. The sound that escaped was a labored wheeze that had my husband’s face turning white. The sound reminded me of all the other times this had happened and I began telling myself the words that have helped every other time: “Breathe through your nose; you’re still exhaling, so you’re still breathing.” I repeated this in my mind several times and within a minute or so, the attack passed. I had tears running down my bright red face, my entire body was sweating through my clothes, my throat was raw, my heart was racing and I was mildly embarrassed about the scene, but other than that, this attack did not have lasting affects on my biology.

During those attacks, my breath rate and depth changes, which changes my internal chemistry and begins a chain reaction in my body, mind and emotions. This relationship between breath, internal chemistry and how I think and feel is reciprocal: my breath affects my chemistry and my chemistry affects my breath! I don’t have to be choking to experience this complex relationship. How wonderful would it be if, during labor, I could have taken deep diaphragmatic breaths and elicited the relaxation response in order to let my children be born more easily? Unfortunately, it didn’t work that way for me. My breath, body, chemistry, mind and emotions were not on board with that type of breathing. Cancer patients often deal with intense pain and debilitating anxiety. And for them, the stakes are higher if they don’t breathe.

In a 2001 study about the correlations of dyspnea [disp-nee-ah] (perceived shortness of breath) and physiological changes in cancer patients, Canadian researchers found that “anxiety may contribute to dyspnea, but anxiety may also be caused by dyspnea.”

This is the story of S, a student with debilitating anxiety. S introduced herself to me in a halting breath the first time she took my class. Her cap that covered her hair loss matched her outfit and her nails and her makeup was tastefully done, and she told me in a very matter-of-fact tone that she was afraid for her life. She had been diagnosed with a cancer that has a high chance of recurrence, and she was here because she wanted to do all she could to avoid that happening. She had recently been to a highly recommended “healer” who told her that if she didn’t get her anxiety under control, it would kill her. I lost my own breath at hearing this, but I quickly recovered and started to ask her questions about her cancer situation. I stopped when I saw she was near tears with worry. Instead, I asked her where her mat was placed, and I asked her to move it a little closer to the door while I collected her props. I told her that at any point if she wanted to leave, she could. As we set up her props together, she reiterated how scared she was about her cancer coming back, and she told me how she didn’t want to leave her adolescent son without a mother. She told me all of this in a whisper of a voice, her breath a series of short gulps that moved her chest but nothing else.

Diaphragmatic breathing is what I wanted for S, but I knew from my own experiences with mild anxiety that this wasn’t going to be possible without some work first.

I decided to start the whole class in a restorative pose and talked to them about breathing during difficult times. I told them what a poor biological design we have that during those times when we need our deepest, calmest breath, it’s not always available. I told them we were going to practice a breathing sequence that I designed to get into a calm breath during those times of great stress. I asked them all to chant the Hawaiian word, aloha, and to drag out the sound for as long as they could. After several rounds, we moved into a few cycles of breath sipping on the inhale, then on the exhale… then into uninterrupted breathing while moving the fingers – open palm for inhale, closed palm for exhale. I explained how when we use the diaphragm as our primary mover of breath, we encourage lymphatic drainage, massage the abdominal organs that lie immediately beneath the diaphragm and improve circulation. I asked my whole class to imagine all of this happening with each breath, but I kept my eye on S. Soon enough, her breath began to slow down. When I asked her how she felt after class, she was reluctant to give me an answer, but she came back the next week. She continued to come to class, and we talked a lot about how beneficial it is to breathe consciously and using the diaphragm, as well as how to get to that point during challenging times.

Connecting to the diaphragm through vocalization can cut through anxiety and pain; it’s an ancient way to communicate and connect. Following that up with exercises that meet someone where they are – sipping their breath in shallow bits, but asking them to extend what they are already doing, forces the mind to refocus and initiates the changes in chemistry. After these practices are done, a deeper, smoother breath may be available and then the benefits to body, mind and emotions can be felt.

We all need reminders to breathe from time to time – even yoga "experts"! During those times when our breath is most vital, we need additional support to reconnect with the breath and support our body’s optimal function. We can offer our students that support by guiding them to connect to their diaphragm, have them meet their breath where it is, and then stretch it to a more functional rate and depth.

Every inhale nourishes a cancer patient’s cells, every exhale rinses them; every breath counts.

3 Savasana Lessons for a Grateful Life — and Graceful Death

How Amy I? It's Complicated

5 Ways to Recharge Yourself

The Thread of Yoga 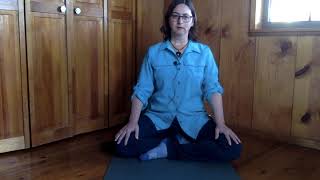 Insights from a Challenging Year

3 Savasana Lessons for a Grateful Life — and Graceful Death

How Amy I? It's Complicated

5 Ways to Recharge Yourself